I jammed the brake pedal and the truck lurched to a halt.  As I clamored out, I cursed the old, sky-blue canoe perched atop my pickup. It had slid forward another foot, forcing me to stop again and retie it again – for the fifth time actually.  The ride from Whitefish to Columbia Falls had been smooth sailing, even the first twenty miles of the North Fork Road had been easy.  But as we drove further north and the road got rougher, the canoe started bouncing around and slowly creeping forward.  By the time we hit Kintla Lake Road, the dips and ruts were big enough to bounce the canoe a few inches in the air and loosen the straps considerably.   As I pulled on them, I heard Chrissy sigh from inside the cab and looked up to see her staring out the window into the thin forest that flanked us. 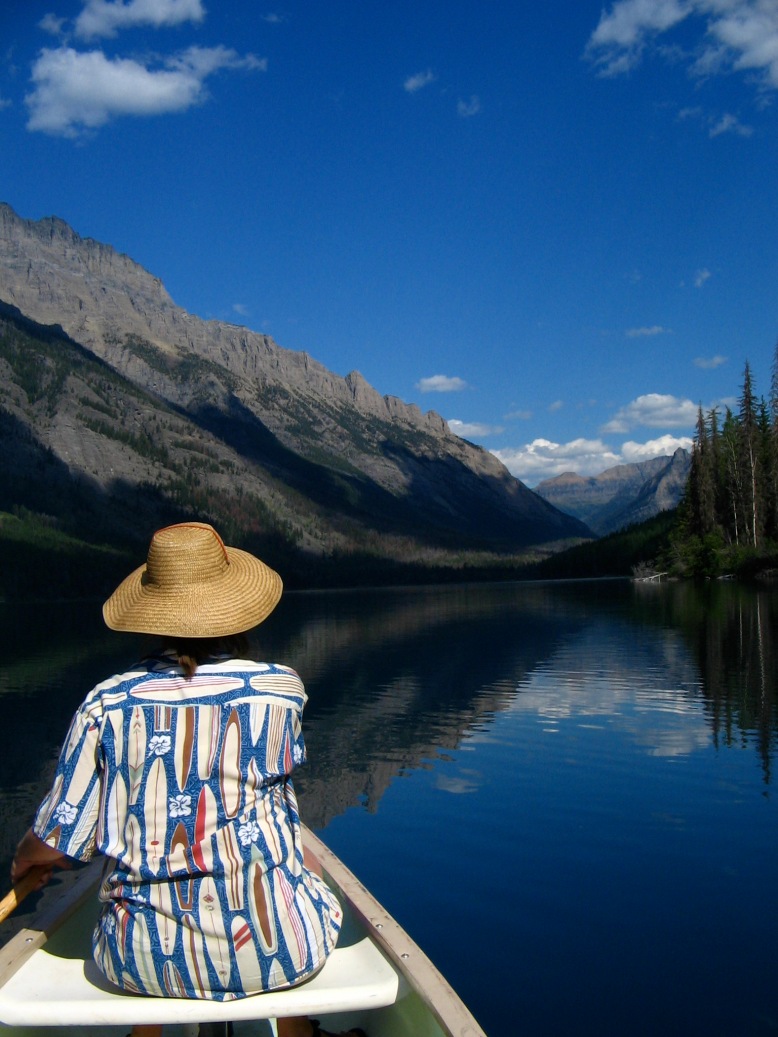 It was her 29th birthday, and she hadn’t really wanted to make this trip.  My birthday was the next day, and I really wanted to make this trip.  It’ll be so beautiful, so peaceful I cooed.  I repeated the mantra of relaxation: no phones, no tv, no neighbors, only a good book and the water. I assured her I’d do all the work, the packing and preparation, the driving, the camp chores, the paddling even; she could just read and drink wine while I ferried us to the campsite.   It’d be perfect!!  After a day or so of my babble, she acquiesced, and I loaded up the truck and we headed off.

She was quiet but smiling when we left Whitefish. After forty five minutes of rattling up the North Fork Road choking on dust and heat, she was visibly annoyed and road silently in the passenger seat.  By the time I stopped to tie the canoe down for the fifth and final time, she was actually contemplating getting out and hitchhiking home to Whitefish.  I know this because she told me several months later.  I couldn’t entirely blame her.  I had poo-pooed her idea of driving to Nelson or Banff for the weekend because I didn’t want to spend that much time in the car.  Well suffice it to say, Kintla Lake is a lot further from Polebridge than it seems, the road is rough and dusty, and there instead of a nice hotel with a hot tub and a bar at the end, we had six miles of paddling to a back country campsite and two nights of sleeping on the ground.  Happy Birthday honey, I thought as I climbed back into the truck.

It wasn’t even our canoe, but a loaner from some friends in Whitefish, and it was old.  Older than my battered pickup, older than either Chrissy or me.  Old and broken.  The rails running along either side had been busted ages ago.  The sides curved nicely, the way canoe sides are supposed to, until the middle of the canoe where they ran bullet straight for three feet before they began curving again.  It was 19 feet long and weighed over eighty pounds.  I was glad Chrissy hadn’t been with me when I picked it up from Scott and Barb the day before, she probably would have demanded we bag the whole thing then and there.  I wasn’t even sure she could lift it off the truck.

Scott had explained the busted rails after we hoisted it onto the truck, the day before.  I shared the story with Chrissy, chuckling at the misfortune of the canoeists – she didn’t think it was funny.  As Scott told it, years ago, two of their friends had gotten the canoe hung up on one of the culverts that allow the Whitefish River to pass under highway 93 just south of town.  The culverts are big, you could probably pass two canoes side-by-side through one of them, and the current is relatively slow.  Still, approaching them is nerve-wracking, there’s a small drop off, and they’re fairly long.  But with a smidge of planning and communication, it’s a pretty straightforward, albeit exciting, little shot.  Regardless, their canoe got hung up sideways on the front of the culvert and there appeared no way of recovering it without a serious operation.  The couple decided after what I can only imagine was one of the shortest, tensest discussions in their relationship, to fold the canoe in half and shove it through the culvert.  Being some type of composite plastic, flexible but with a strong memory of its original shape, the Old Town emerged broken and slightly deformed but otherwise seaworthy from the far end of the culvert, and the party continued to the take out at Highway 40.  The friend’s relationship, however, was unrepairable and they divorced shortly after returning the canoe to Scott and Barb.

Broken, old, or otherwise, I had no desire to send the canoe sailing from the roof of my pickup, so I dutifully tied and retied, cinched and re-cinched the ropes and straps, twice on the North Fork Road, once at the Polebridge Mercantile, once at McGhee Meadows and now again, a few miles from the campground at the foot of Kintla Lake.  With the canoe once again safely tied down, I eased the truck into gear and resumed plodding towards Kintla Lake Campground and the put-in. 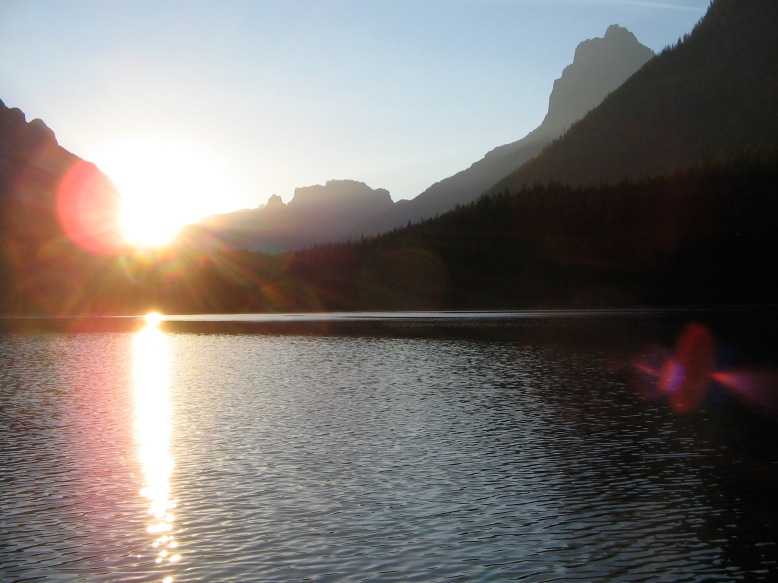 Finally, we arrived.  Dusty, grumpy, tired, and thirsty, we tried wrestling the canoe off the truck.  Chrissy, only five feet tall, couldn’t lift it high enough to get it down.  A grey bearded man ambled over and offered to help.  Together, he and I lifted the canoe off the truck and set it down near the water.  I had reserved a backcountry campsite at the head of Kintla Lake and had borrowed the canoe figuring we could bring lots of extra gear with us.  As much as I love backpacking and limiting myself to only what I’m willing to carry, sometimes it’s really nice to have camp chairs, wine, books, and pillows.  This was definitely one of those times and we commenced to piling the gear into the canoe.  Yellow, blue, and green drybags competed for space with daypacks, extra clothing, camp chairs, and other random things.  After a half an hour of heaving and grunting, we were ready to shove off and begin our paddle.

The lake was mirror calm and reflected the jagged peaks of the Boundary Mountains just to the North.  Water dropping from our paddles and the occasional call of a raven were the only sounds that broke the tense silence hovering around the canoe.  It turned out that paddling a large, crooked canoe laden with enough gear for a three week expedition was more difficult than I had thought, and Chrissy had to paddle for the first bit of the trip.  She wasn’t happy.  I glanced at a dry bag tied onto the thwart and debated opening it.  I knew its contents would turn the day in my favor, but I decided to wait.  Slowly, smoothly we made our way up the lake.

The campsite was tucked into the trees on the north side of the lake, a few hundred yards from the mouth of Kintla Creek and looking southeast towards Kinnerly Peak, Gardner Peak, and Boulder Peak.  It was spectacular and peaceful.  A couple from Ohio was at the campsite, the first night of their multi-day Boulder Pass backpacking trip.  We chatted for a bit, introducing ourselves and then set up our camp.  Chores done, we opened the bottle of wine and made some dinner.  I could see Chrissy relaxing for the first time of the day and relaxed a bit myself.

After dinner, I suggested we paddle to the outlet of Kintla Creek where Chrissy could sit in the sun and read and I could cast for fish.  She was reluctant at first, but I persisted and we headed off.  I patted the pocket of my fishing vest, reassured that the small box that held our future was safely tucked away.  The sunset was spectacular, appropriately long and languid in the late summer, and we relished in the soft light of the evening.  A few small cutthroats rose to my fly, and I even convinced Chrissy to try casting.  She caught a couple herself while I went for a quick swim in the cool water.  As I dried off in the last rays of the evening sun, she sat down next me and smiled.

“How’s your birthday going?” I asked.

“Alright” she said.  “It was a long day.”  I nodded and reached for my fishing vest.  Slipping out the small box I had been minding all day, I turned to her.

“Would this help make it a better day?”  I asked opening the box and taking the ring in my hand.  “Will you marry me?  I love you and know I always will.”

Her look turned once again to annoyance and frustration.

“Is this some sort of joke?” She demanded.  “It’s not funny,” She looked away from me, up the lake and I slipped the ring onto her finger.

“No, Chrissy, no joke at all,” I said, slightly taken aback, that reaction hadn’t been part of the plan.  “I knew I loved you the moment I met you, five years ago today.  I wanted to make this birthday special for the both of us.”  It was true; we had met at a bar, on her birthday and the eve of mine.  It was pretty cool.

“Seriously?” she asked again, breaking into a slight smile.

“Seriously” I said, and kissed her.

“How’s you birthday now?”  I broke the short silence.

“Best birthday ever” she said and leaned over for another kiss. 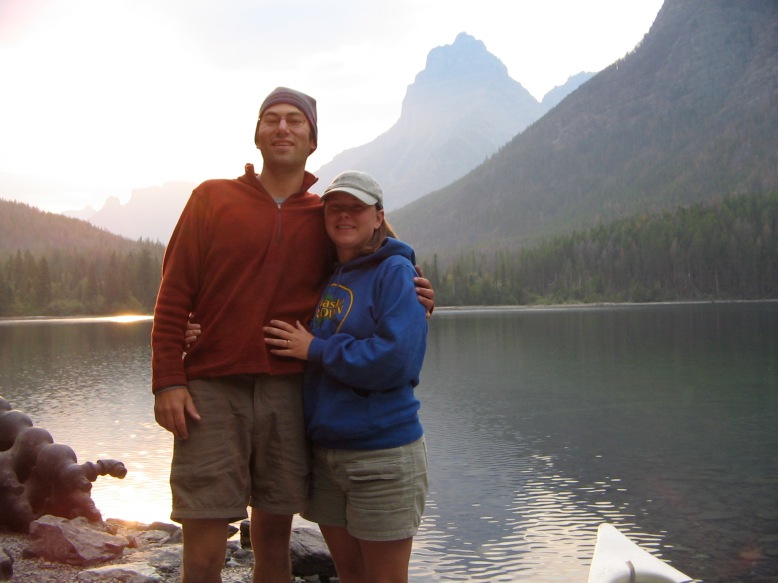 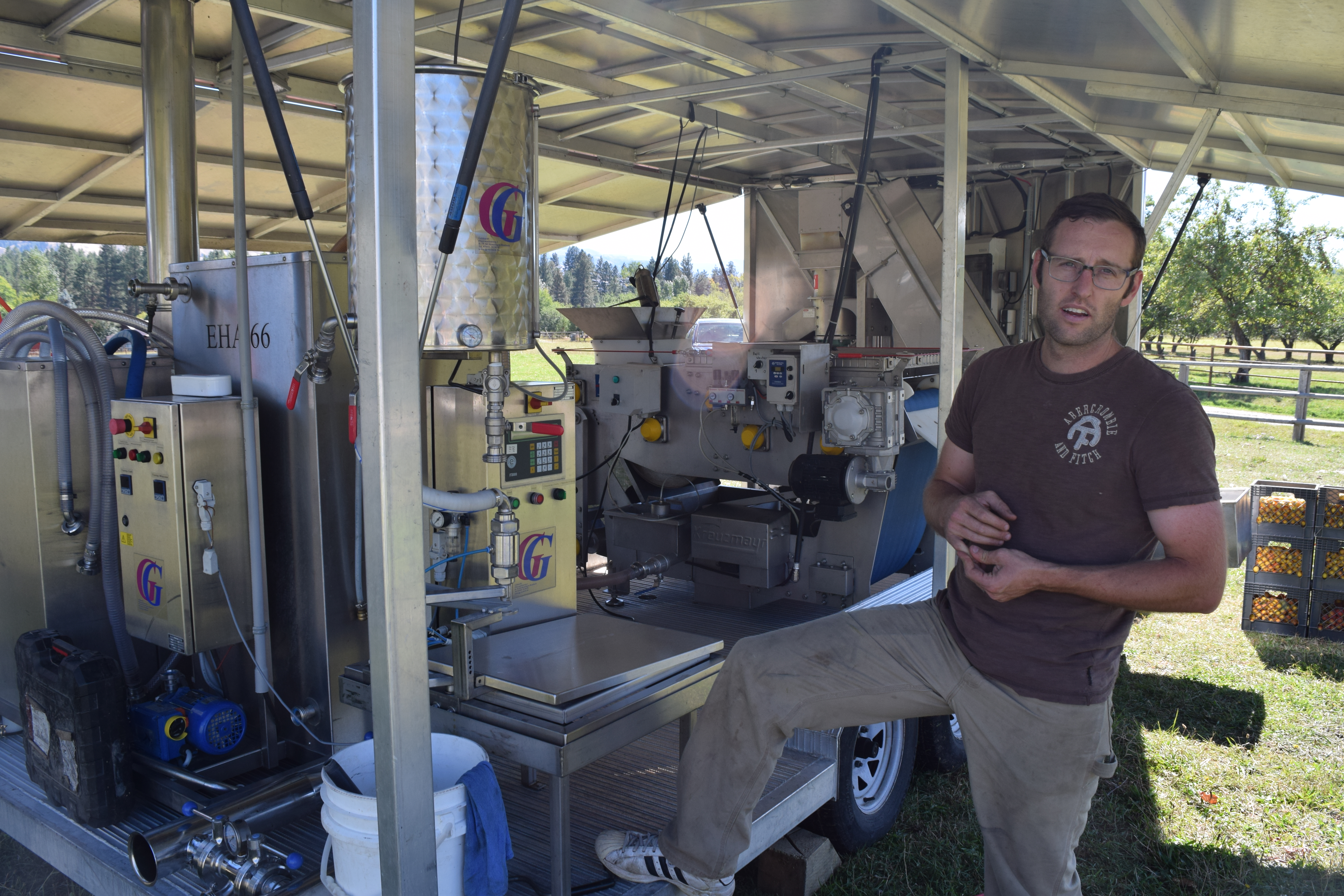